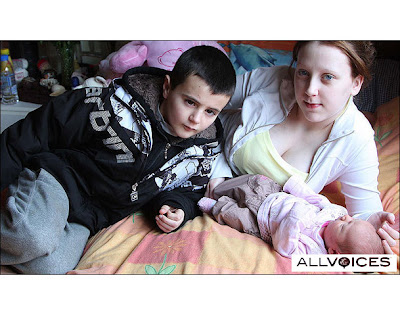 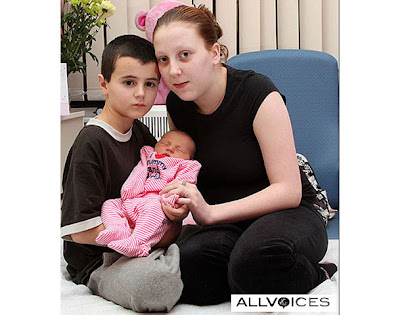 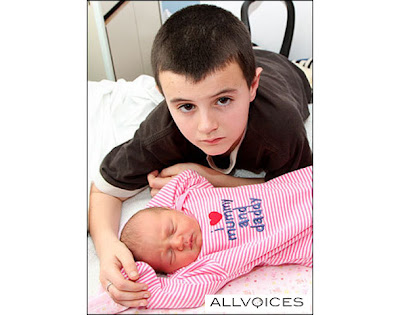 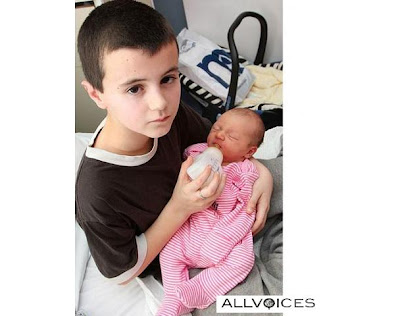 He is 13. Looks 8. And is already a father of a baby girl.
Alfie Patten, boyfriend of 15 year old Chantelle Steadman welcomed his newborn, Maisie Roxanne, a 7lb 3oz wonder, into the world this Monday.
Alfie, a toddler himself is all of 4 feet height and would easily pass off as the kid brother of Chantelle. For that matter his daughter Maisie could easily pass off as his little sister. But, the equations are different here.
For a kid who’s not been used to receiving pocket money (his father occasionally gave him £10) raising a baby would have simply been unimaginable. The couple bank upon government assistance to raise the newborn.
The Story:
The baby is reportedly the result of a one-off attempt at sex by the twosome who really didn’t know what they were doing and were totally oblivious of the results that might follow and the complications thereof. Twelve year old Alfie boy was not even in his teens when it happened!!
The couple got to know about the pregnancy when Chantelle was carrying for 12 weeks. The doctor who examined her suggested that she tell her mum but she was too scared to spill the beans. Soon Alfie and Chantelle decided against aborting the baby and went ahead with the pregnancy.
Penny, the 38 year old mother of Chantelle came to know six weeks later when she bought her teenage daughter a T-shirt which when worn revealed the swelling tummy of her kid. Later Alfie’s family was informed and it was collectively decided that only those closest to the two families would be kept informed as they feared their children would be “demonised” at school.
Cut to this day and one would interestingly note down the musings of different people.
“I didn’t know what it would be like to be a dad. I will be good, though, and care for it.” - Alfie
“I’m tired after the birth. I was nervous after going into labour but otherwise I was quite excited. I’ll be a great mum and Alfie will be a great dad." - Chantelle
“… lovely to have the baby but I wish it was in different circumstances.” - Chantelle’s mum
“He wanted to be the first to hold Maisie after the hospital birth. He tenderly kisses the baby and gives her a bottle." - Alfie’s dad Dennis
“We commend these teenagers for their courage in bringing their child into the world. - Michaela Aston, of the anti-abortion charity LIFE
"… how worrying that in Britain today children are having children.” - Tory leader David Cameron
What’s your say?